The 2014 Noonan Barbell Powerlifting Meet is fast approaching! January 25th we will be hosting, without question, our best meet yet! We've been fortunate to be able to reach many more lifters this year, and have also been able to elicit the help of Brad Madvig and www.thepress.org to help market our competition. This has been crucial to expanding our network of lifters, and all the competitors we've come in contact with have been nothing but great! This seems to be typical of any powerlifter in our experience, being more than willing to help new lifters, give advice when needed, and encourage even those they're competing with.

Another goal we have for this next year is to revitalize our Noonan Barbell team of lifters and expand to compete in more meets around the area. Start looking for Noonan Barbell lifters to be hitting a lot more competitions in the next year or two!

Steve, one of the mainstays of the Noonan Barbell crew, competed for the first time in 3 years in a recent squat-only competition hosted by Southside Bully (www.ssbgym.com) and sanctioned by the USPA. Here's a recap of his experience:

"I was fortunate enough to compete in the USPA Midwest Squat Championships at Southside Bully about a week ago. To say the experience was great would be an understatement. The organizers, judges, lifters, spotters and loaders, and all the other volunteers were awesome. It was definitely one of the best meets I've ever been to."

"I had about a month of hard training before the meet, which is less than I would have liked, but everything came together on that day to make for an excellent meet. This was my first experience with a USPA competition, and it was a bit different than I'm used to. First of all, the weigh in's were held the day before, which is great if you have to cut any kind of weight, as it allows you plenty of time to rehydrate and eat after the fact. I felt like this helped me a ton in staying injury free as well, as being very depleted and then lifting maximal weights often don't go well together! We made it down just in time to make weight, and I was able to come in 5 lbs. under, which tells me I overestimated how much I was going to have to cut. No problem, that just meant I got to eat more that night!"

"The morning of the meet was 20 below zero, and it took me right up until my first squat attempt to be able to feel my feet. Walking out a squat with numb feet is not something I would recommend. Other than that, warmups went smoothly and everything felt light. I worked up to a final warmup rep at 315 lbs. and left it at that. Upon advice from someone smarter than me, I planned to open lighter than I normally would and started at 345 lbs. It felt light; really light. Usually when I get in the mid 300 range, I can tell how my final attempt will go, and I knew I was off to a good start. Another plus was that my opener I had just nailed was a state record. That got my confidence up even more. I took a conservative second attempt at 380 and again it felt easy."

"At this point, I knew I was good for 400 plus, which was more than I had hoped for when I started training a month before. I set my third attempt at 402 and walked back stage to throw my sweats on and stay warm until I was up. There are a few times in my lifting career when I have known that I was good for a lift, and it was as if I had already done it. I can't describe this feeling any better than to say it was a done lift, and all I had left to do was watch myself complete it and enjoy every second. Kyle Harth, who was coaching me that day, was in back and I told him that I was getting it, no question. He told me the same, that my previous attempt was fast, and that I was good for 402 no problem. I was able to relax like I never really have in a meet before, and I had several great conversations with other lifters while I was waiting. The flight continued on through the other lifters, and it was back to me again."

"This is my favorite part of any meet: hearing the judge say "Bar is loaded" and feeling the adrenaline surge that you've been trying to suppress go absolutely through the roof. At that point, there's no shutting it off. You hear that command, hear the music blasting, hear the crowd cheering, and you could just about run through a brick wall. For me, the intensity is on par with jumping out of a plane. This meet was awesome because I had no doubt in my mind; I could walk out to that bar almost smiling, enjoying every second of adrenaline that was coming my way. There was no hesitance, no question, no doubt. I was more alert, awake, and alive than I've ever felt in a meet before. The squat itself was over in a second. I walked it out, squatted, racked it, and before I knew it, was done for the day. In my haste, I cut my depth a little short on the squat and got one red light, but two out of three whites is still a good lift, so I walked off the platform with a 402 squat, a state record, and first place in my weight class. I feel like I had more in the tank that day, and I can't wait to show that in another meet! I plan to compete several more times in 2014 and hope to take as many of our lifters as possible with me!"

"I encourage anyone out there who is thinking about competing to just jump in and do it. The weight doesn't matter. It's the experience. You will be hard pressed to find anything like powerlifting, where the only thing more intense than the competition is the comraderie. I met so many people at this meet that I now call friends, and our only common strand is the constant drive to be stronger than we were yesterday."

As you can see, the experience is not just guaged by how much you lift. Powerlifting is a sport of constant self-improvement and testing. It's knowing your limits and not being satisfied with those limits. We at NSS encourage all of you to, if not compete, at least come check out the meet for yourself. It will be held on January 25th, 2014. Information can be found at www.noonanbarbell.tumblr.com. Questions can be directed to Steve at steve.r@alexnss.com. Thanks, and we look forward to seeing you there! 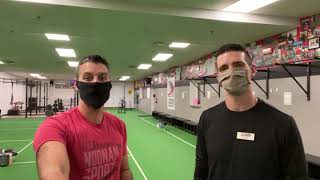